In traditional Chinese medicine, and also Western folk medicine, Burdock has been used for centuries. It is a product that is known for its ability to heal your skin, and also cleanse your blood of impurities. It comes from a plant that is entirely edible, and is very popular in Asia and Japan. It has been used as a hair tonic, thought to stimulate growth in those that are suffering from alopecia, and is a great cosmetic treatment for those that have mature skin. Let’s look at the health benefits of Burdock root, and why you might consider adding this to your supplemental regimen. 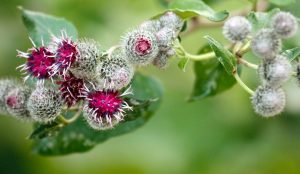 Where Does It Originate?

This plant actually originates from biennial plants, specifically Asteraceae. It is actually harvested and the roots are eaten as a vegetable, and is a popular dish in both Asian and European markets. The slender roots are only a few centimeters across, reminding people of string beans served in the United States. It has a mild but pungent flavor, and in traditional folk medicine, herbalists will often use this for not only purifying the blood, but also as a diuretic. It has also been used as a scalp treatment in places such as Europe, showing that it can actually stimulate hair growth. It has many medicinal properties, and you can actually find it for sale on the Internet, allowing you to get easy access to its most beneficial properties.

According to modern medicine, it is used to help people increase the amount of urine flow, and is also capable of killing germs. This is why it is used to cleanse the blood when taken orally, and has also been shown to reduce fevers. This could be directly related to its ability to improve the immune system, and at the same time, purify the blood of diseases that you may have. It is used to treat everything from cancer to the common cold, and is also used for bladder infections, syphilis, gout, joint pain, and gastrointestinal disorders. For those that have a history of high blood pressure, it is used to prevent arteriosclerosis which can cause plaque to harden inside the arteries. Some people have actually reported that it increases your libido, and can help with skin conditions such as eczema, psoriasis and acne.

This product is available on Amazon, as well as other herbal stores that are online. It is very inexpensive, and can be purchased in many different forms including supplements that are edible and oils which can be used on your hair and scalp. It is priced so affordably, you could actually use it not only as an oral supplement, but as a topical ointment and not worry about the price. It is designed to be used by people that are worried about their health for the reasons that have been mentioned, and can also be perfect for your skin and the regrowth of hair.

Now that you know a little bit more about this product, you might consider taking it as a supplement to improve your health and appearance. Burdock root has been used for centuries all over the world, and now it is making its rounds in the mainstream media, and used by more people than ever before because of its highly publicized medicinal properties.