Cape Aloe or Aloe ferox also goes by the names of Aloe Gel, Aloe Vera, Aloe barbadenis, Aloe natalenis, Aloe latex and many others. The Aloe ferox plant grows to a height of about three meters and can be found in the scrublands based in South Africa as well as in the semi-desert areas of the Karoo. The plant bears succulent and thick leaves along with orange or red hugged blooms that stand up to 1.2 meters above the leaves. This plant holds water in the leaves and is able to grow even when there is a low availability of water. 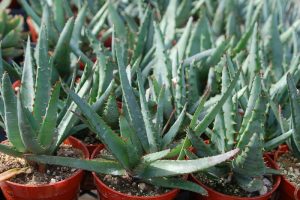 The Aloe ferox plant is well-known for its healing qualities.  In certain areas in South Africa individuals harvest the sap that is located just below the surface of skin on the leaves. The stems of the Aloe ferox produce a resinous, hard and black substance that is known as aloe lump. This product is utilized for the purgative qualities it contains.

Medicinally, Cape Aloe is used most commonly as a type of laxative. When this product is used commercially, the therapeutic products produced that contain Aloe ferox are more commonly called bitter ferox. The purgative properties of this plant are used for encouraging bowel movements and to cleanse the intestines. In addition, Cape Aloe is also used to alleviate symptoms associated with IBS (Irritable Bowel Syndrome).

Other health benefits of Cape Aloe include that individuals use an aloe gel that they apply topically to the skin. The gel is used to treat skin conditions such as cold sores, sunburn, psoriasis and burns. There are chemicals that are present in aloe gel that are said to increase circulation located in the blood vessels inside the skin as well as for killing bacteria. These effects combined suggest that Cape Aloe gel can speed up the process of wound healing. One of the best benefits associated with Aloe ferox is that it can be used on all types of skin. Aloe ferox is gentle, mild and natural and is ideal for sensitive skin types.

Aloe ferox has also been used as a type of detoxifier. However, it has been said that the product must be used as suggested as excessive amounts have the ability to cause diarrhea. When Aloe ferox is used internally in order to treat a health condition, it is advised for the individual to begin will small doses so that the body is able to adjust to this type of treatment.

Some individuals use aloe latex orally for the treatment of constipation. Aloe latex is also used orally to treat the following conditions:

Cape Aloe contains over 30 types of amino acids that are regarded as an essential part of the human body. Most amino acids offer the cells in the body a chance to refurbish themselves and to grow. In addition the amino acids are associated with the production of hormones, enzymes and essential antibodies.